NCHMCT JEE 2019 Students’ Reactions - Candidates who have arrived at the NCHM JEE 2019 test centre talk about how they have prepared for the exam, what are the books that they have consulted. Some of the students also share with us the preparation strategy and which sections they will try first. Most of the students hailed the move to conduct the NCHM JEE 2019 in computer based mode. While interacting with Careers360, students also spoke about the books from which they prepared for the exam as well as other study material which they consulted. Some of the students also said that they are a bit sceptical about the computer based mode is it conducted in this manner for the first time. 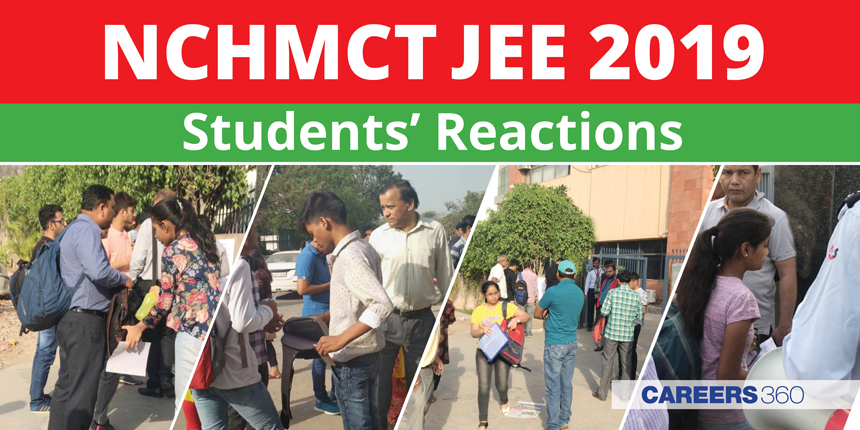 Vikas said that exam was moderately difficult. He found Numerical and Maths sections difficult while English and rest of the sections were easy. According to him, the idea of conducting the exam in computer based mode was great.

Moksh who is one of the NCHMCT JEE test takers shared that recently he appeared for his 12th board exam this year. He said “I have completed my 12th exam from CBSE board with Science stream. My preparation is good and I am quite confident as I have appeared in all the online mock tests.” He also added that he took help from Youtube to prepare well for the exam. When he was asked about which section he is good at, Moksh said, “I will go for Aptitude test and then English, my last preference will be Maths.” To the question, “What is his take on NTA conducting the exam in computer based mode,” he replied he is neutral about the decision. He also added later that writing exam in offline mode is a little easier than computer based one.

Yogesh shared that he is from CBSE board and his preparation for NCHMCT JEE exam is good. He did not take any coaching, neither did he prepare from any particular book. He further added that he sought help from Youtube and Internet.

While talking to Manan about his strategy and how he prepared for the exam, he said “he prepared for the exam in the last two months after his 12th board exam. I did not take any coaching, I was more into self-preparation, but yes, I referred book from ‘R Gupta book’.” According to him ‘R Gupta Book’ is one of the best books for the preparation of NCHM JEE exam as it covers all the sections and includes solved sample papers for the last two years (2017-2018). He did not take any coaching and it is his first attempt for NCHMCT JEE.

Vishal has done his schooling from CBSE board. When being asked about his preparation strategy, Vishal said, " I have prepared well for the exam, but I have not taken any coaching and moreover this is my first attempt. To the question, Which section he is strong at or which one he will be attempting first, he replied that he will opting for Aptitude test first.

When interacted with Shruti, she said, "I did not take any coaching for the preparation of the exam, in fact, I referred random books to prepare well for the exam". When asked about which section she is strong at, she replied that it's reasoning and she will be answering it first. Shruti is from CBSE board.

Career Scope for Women in Hospitality Industry: Check what is ...

How to Choose a Hotel Management College After 12th?

How to Choose a Hotel Management College After 12th: Check the...

Food Production: Get details here about the courses one can pu...

Of course NCHM JEE sample papers are a must to solve in order to give a boost in your preparation. You can avail the sample papers here. Download the PDF for free and solve them at your ease:

With this you must also be needing NCHM JEE Mock Tests 2020. We have also provided here the link for you to access the same.

As the application process is over, you can apply for the exam next year in 2021. Meanwhile you can aim for other top hotel management exams whose application form are still available-

when will we get our admit card

NTA has postponed the entrance test of NCHM JEE 2020 until further notice. The exam was earlier rescheduled from April 25 to June 22, 2020. Now as the exam dates are not announced, there is no information till date on the release odf admit card.

However, NCHM JEE admit card 2020 is supposed to be released 15 days prior to the exam. And according to the sources NCHM JEE 2020 will be conducted in the end of July or beginning of August.

What is NCHM JEE exam date? has it been postponed?

The exam was scheduled to be held on June 22, 2020. The announcement of the postponement of the NCHM JEE 2020 was released on Sunday, June 07, 2020. Human Resource Development minister Ramesh Pokhriyal in at tweet on Sunday 7 June, announced that the NCHM JEE 2020 exam has been postponed until further notice.

Hope this helps. Thank you.

when will entrance exam of NCHMCT will held .is it further postponed.

National Testing Agency (NTA) will conduct National Council for Hotel Management Joint Entrance Examination (NCHM JEE) is conducted on 22nd June 2020. There is no such news about further postponement of  NCHM JEE. Please click the below link to know more.

How to crack GD-PI for Hotel Management admission