NCHM JEE 2016 started on April 30 at 10 am in 33 cities across the country, with around 20,000 candidates appearing in the exam. The entry of the candidates to the exam hall started at 9 am. However, some students were allowed to enter the examination centres even after the test had started. The national level test, which is of 3-hours duration, continued till 1 pm. 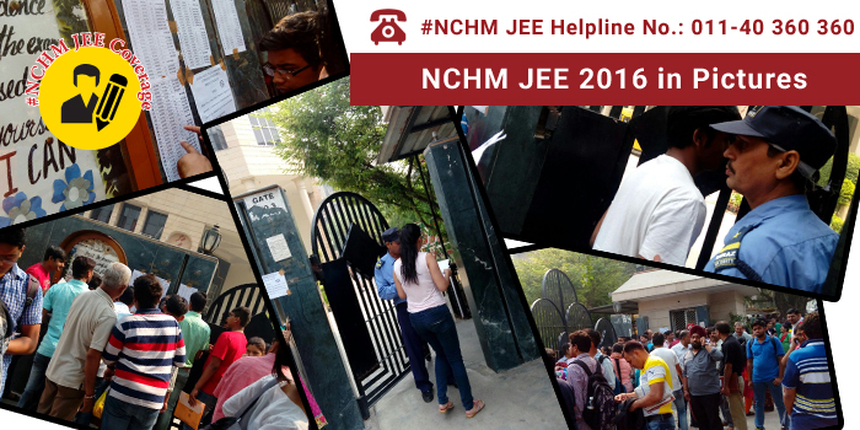 The National Council for Hotel Management and Catering Technology (NCHMCT) is conducting NCHM JEE 2016 for admission to 52 institutes of hotel management (IHMs), including 21 Central, 16 State Government and 15 private institutes, offering around 8,000 seats. Careers360 brings you the live moments from the NCHM JEE 2016 venues. Scroll below to glance through the NCHM JEE 2016 in pictures.

Candidates outside the gate of NCHM 2016 venue

Devices not allowed inside the premises of the centre

Candidates going through the frisking process while entering the exam hall

Stay tuned to www.hospitality.careers360.com for more news and updates

1 day ago
Read More
View All News and Articles

National Testing Agency has not yet announced the exam dates for NCHM JEE 2020. Only the correction dates are available that is from 16th May 2020 to 22nd May 2020. The release of admit card and the exams dates are yet ti be notified. Please click the below link to know more.

Which colleges/universities will allow the admissions with NCHM JEE results?

As we know that NCHMCT JEE 2020 will be conducted by National Testing Agency (NTA). It's registration process is going on and will continues upto May 15th 2020.

Till now NTA did not released the statistics relates to the registration process so it is little bit difficult to tell you.

Last year total 30722 candidates were registered for the exam out of which 25473 candidates appeared in the exams.

To know more about NCHMCT JEE 2020 read this article .

I hope this information helps you.

during lockdown nchmct form fill date was extended or not

NCHM JEE, is a national level entrance examination conducted for admission to top IHM's by National Testing Agency. Amidst covid-19 pandemic, the last date to fill the NCHM JEE 2020 application form has been extended many times. Finally third time in a row, for the time being the last date to fill the form is May 15, 2020. The application form shall be accepted till 4:00 p.m. and the submission of fee can be done on the same day till 11:50 p.m.

You can pay the application fee via debit card/credit card/payTM. The other dates regarding admit card dates and most importantly the exam date of NCHM JEE 2020 will be released by NTA after the assessment of situation after May 15, 2020. To get more details about the important dates of NCHM JEE 2020, Click here .

Application form has been extended till 15th May, you can apply at https://ntanchm.nic.in/ntanchmcms/public/home.aspx

The exam will be conducted in online mode for a duration of 3 hours in Hindi/English with 200 MCQs from the following sections;

For each correct answer four marks will be awarded while for every incorrect answer 1 mark will be deducted.
Read More
Answer
Answer Later
Report