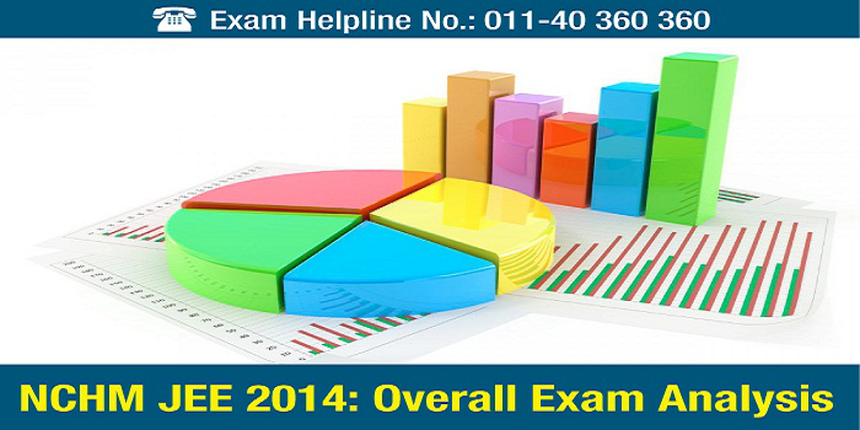 NCHM JEE 2014 - An overall exam analysis presented by Careers360 takes an overall look at the National Council of Hotel Management and Catering Joint Entrance Examination 2014, year-over-year  total number of registration of candidates,  difficulty level of the exam and different sections of the question paper. Apart from renaming of exam to NCHM JEE from NCHMCT JEE, the paper pattern of the written examination saw no new changes.

Click here to Enroll  for All India HM Counselling Pack 2015 to get All Alerts, Updates and Guidance for College Selection

To know which colleges you will get based on your Rank in NCHMJEE 2014, Click here

Careers360 brings you the  details of the NCHM JEE 2014 exam along with the statistics and which section was toughest for test takers and their reasons for it.

The all India level hotel management entrance examination has been renamed this year by the exam conducting body “National Council of Hotel Management and Catering Technology” this year. It has been renamed to NCHM JEE from NCHMCT JEE. However, many candidates were not aware of the exam name change.

Candidates Siddarth Singh and Poonam, who appeared for the exam at Lakshmi Public School, located in Delhi, said they were not updated about change of exam name. They told that even no official announcement was made regarding the same in the examination hall.

Another test taker, Sapna Tiwari said that although the question booklet carried the new exam name NCHM JEE but it was not noticed by many. Even invigilator had not mentioned that the entrance exam from this year will be called as NCHM JEE, she added.

Thus, exam name alternation introduced by NCHMCT, an autonomous body under Ministry of Tourism, Government of India has gone unnoticed by many candidates.

According to Nischay Bansal, a test taker, two sections “Mathematic and Numerical Aptitude” and “Reasoning & Logical Deduction” were moderate in terms of difficulty level.  He was satisfied with the overall question paper and hopes for scoring good marks in the written examination.

Pooja Singh, who appeared for the exam at Delhi center said, “English Language section was the easiest section. She attempted the section first. The toughest section for her was General Knowledge & Current Affairs. She found the current affairs based questions very difficult as most of the questions were related to hotel industry and locations of various hotels. She said that these kinds of questions were least expected by her.

Rohit Malhotra, another NCHM JEE 2014 test taker, who appeared for the exam at Lakshmi Public School located in Delhi, found questions asked in the General Knowledge & Current Affairs section very difficult. He was clueless for 5-10 questions covered in the same section.

Click here to use the NCHM JEE 2014 Rank Predictor, a tool which provides information on your estimated NCHM JEE rank and also does a rank comparison with other NCHM JEE test takers.

My brother has completed 10+2 years of education with English as board subject. He is from commerce background and now wants to take up hotel management course. Is he eligible for NHCMCT exam?

Yes, he is eligible for NCHMCT  JEE . As he has passed his senior secondary exam with english as a core subject . The online application for NCHMCT JEE 2020 will start from 1st of JAN to 29th of FEB ,2020. For more info about NCHMCT JEE 2020 please visit our informative link :-