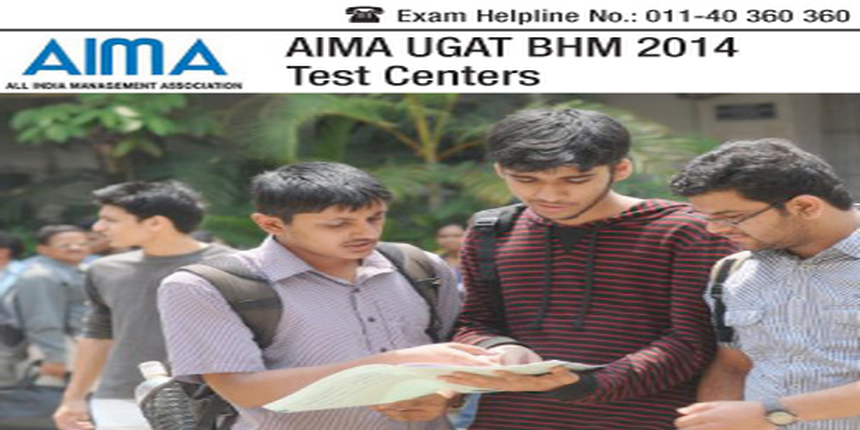 AIMA UGAT BHM 2014 Test Center: The AIMA Undergraduate Aptitude Test BHM is scheduled to be held on May 10, 2014 atseveral test centers located in 13 indian cities. Besides, the AIMA UGAT 2014 will also be held on the scheduled date in two following abroad cities Singapore and Dubai.

The entrance exam will be conducted by the All India Management Association in both paper-based test and computer-based test format.

Qualifying candidates of AIMA UGA BHM 2014 will be offered admission for undergraduate hotel management course for the academic year 2014. Some of the AIMA UGA BHM 2014 participating institutes are Dr YSR National Institute of Tourism & Hospitality Management at Hyderabad, Goa College of Hospitality & Culinary Education at Tiswadi, and Culinary Institute of India & CITMS at Durgapur.

Candidates willing to appear for AIMA UGA BHM 2014 online or offline test have the following options to choose their preferred examination center.  The below given list of examination/test centers is arranged in alphabetical order. The AIMA UGA BHM 2014 Test Centers list is divided into State/Union Territory name, test city code, test city name, mode of test.

Note: AIMA reserves the right to cancel any of these above mentioned test cities. So candidates are advised to confirm their roll number and alloted test center with AIMA official website.

AIMA UGA BHM 2014 Exam – The exam was conducted on May 10 by the All India Management Association...

Ashish, UGAT is conducted by AIMA for admissions
In various undergraduate programs like BBA, BCA, BHM, etc.
The online registration has started from 14 January 2020 and will end in April 2020.
The Examination will be held in 9 May 2020.
For eligibility, you must have passed 12th from any recognised board and no minimum score is required. The examination is offline mode, and for IMBA, BBA, BCAit will be of 2 hours(130 questions) and fir BHM it will be of 3 hours(180 questions).
The Medium of question paper will be both Hindi and English.
The questions will be asked from:

For more details please check the link below:
https://www.careers360.com/exams/ugat

we will get a free seat in bba colleges

Please specify which college are you talking about so that I can answer your question in the most appropriate manner and provide with the right information. Also provide me more details on what you are talking about exactly.

what is the preference to give which is best for bba?? in ugat

where is the link to apply for the ugat exam

The UGAT BBA exam for 2020 is scheduled on 9th of May. The mode of application is either online or offline. The application fee is Rs 650. Eligibility criteria states that the candidates must have passed their higher secondary examination (class 12th) from a recognized board. The conducting board of the exam is All India Management Association (AIMA).

For more details about the exam you can also refer to the link given below :

when ugat application form will release in 2020?

Are you asking for BBA programme? UGAT application form is expected to come out in First week of April 2020. You can check the further information to go through with the given below link.

View All Questions
Have a question related to UGAT ?
Under Graduate Aptitude Test (UGAT)
Get Updates Applications Open

Your UGAT brochure has been successfully mailed to your registered email id .