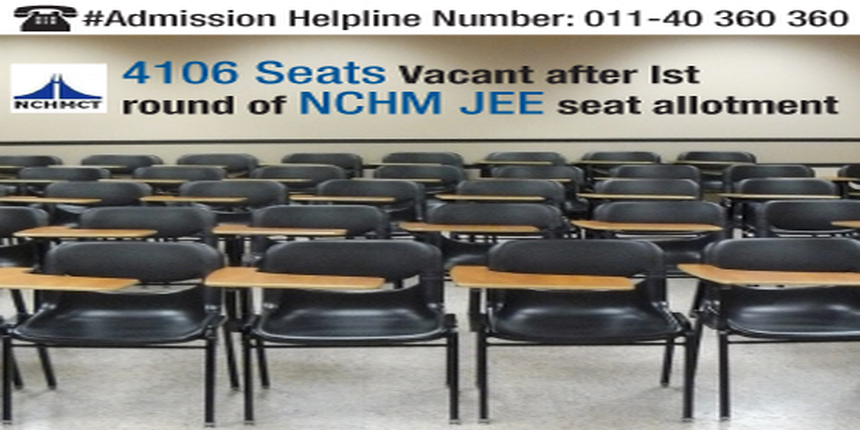 The exam conducting authority NCHMCT concluded the first round of Seat allotment to all IHMs and many other participating Hotel Management institutes on June 16, 2014 even as a total of 4106 seats remained vacant for next rounds of counselling and of NCHM JEE seat allotment.

National Council for Hotel Management & Catering Technology (NCHMCT) has declared the institute-wise vacant seats on June 24, 2014.  While a total of 4106 vacant seats are offered for second round of seat allotement, which is scheduled to start on June 28, 2014.

Click here to enroll  for All India HM Counselling Pack 2015 to get All Alerts, Updates and Guidance for College Selection

According to the NCHM JEE notification a total of 2551 and 569 seats under open and backward category respectively have been declared vacant. Qualified candidates of NCHM JEE 2014 written examination and who are allotted with All India Rank are eligible to participate on the vacant seats in the second round of seat allotment process, which is scheduled to begin on June 28, 2014.

Prior to second round of NCHM JEE 2014 counselling, candidates are allowed to modify and re-position order of preference of their opted IHMs during 2nd round choice modification, a three days event, which will be held on 25-27, 2014 till 5.00 pm.

The entrance exam was conducted on April 26, 2014 to admission for B.Sc. Hospitality & Hotel Administration courses on 7920 seats across 21 central government IHMs, 16 state government IHMs and 15 private hotel management institutes. The written exam was registered by 21,600 applicants and as many as 19000 candidates appeared for the exam.

Central Government IHMs- IHM Shimla  has the highest number of vacant seats- 153, followed by IHM Hajipur with 145 vacant seats, and the third highest figure for vacant seats stood at 140, which was recorded by three Institutes of Hotel Management.

Stay tuned to hospitality.careers360.com for more news and feature articles on Hospitality and Tourism exams.