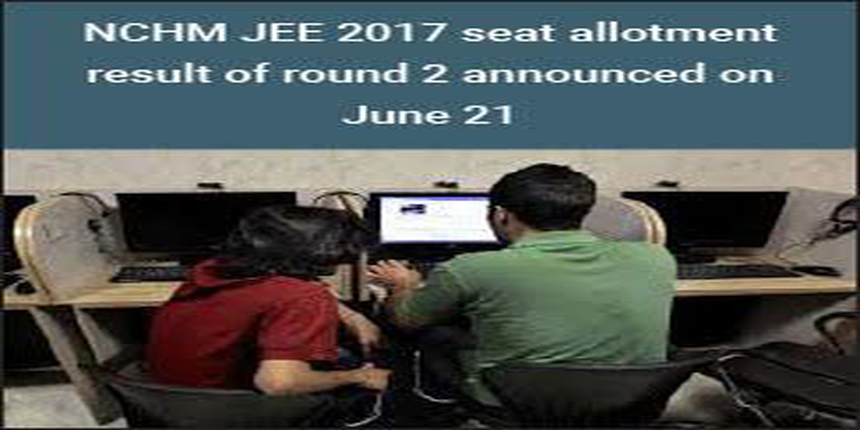 National Council of Hotel Management and Catering Technology (NCHMCT) has announced result of second round of NCHM JEE 2017 seat allotment on June 21. Registered candidates can check the result by signing in using their roll number and password. A total of 8882 seats will be allotted to successful candidates across 56 participating institutes.

After candidates reported between June 13 and 16 for round 1 across the NCHM JEE 2017 participating institutes, there were a total of 4689 vacant seats.

Check below category-wise seat vacancy after first round-

Remote admission at admission centres (fresh allottee only) after second round of NCHM JEE 2017 seat allotment will be done from June 22 to 24. Vacancy due to non-reporting will be announced on June 25, 2017.

The result of first round of seat allotment was declared on June 12. Conducted on April 29 in offline mode, result of the entrance exam was announced on May 23. Admissions will be given to successful and eligible candidates in B.Sc in Hospitality and Hotel Administration.

Get real-time alerts on exam & colleges at your fingertips with Careers360 App!

Stay tuned to hospitality.careers360.com for more articles and features on NCHM JEE 2017.

NCHMCT JEE Mock Test 2020 have been released by the National Testing Agency in online mode on its...

How to fill NCHMCT JEE application form 2020 - Check step wise guide for how to fill the NCHM JEE...

Bsc. in Hospitality and Hotel Administration

Bsc. in Hospitality and Hotel Administration - Get to know all the specializations, top 10 colle...