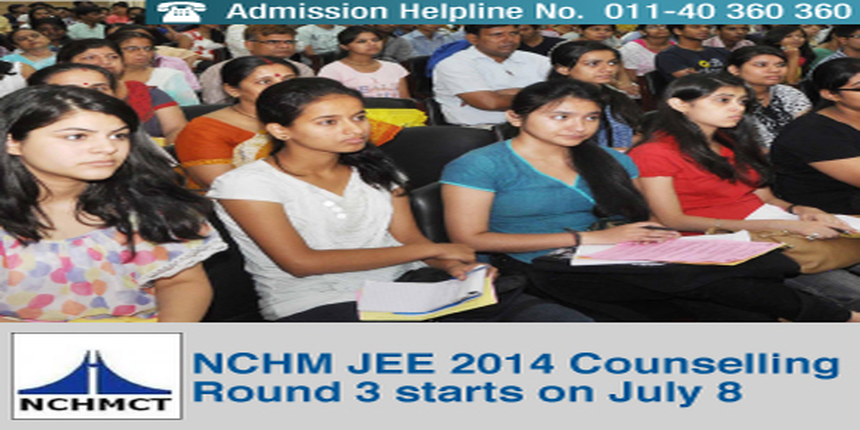 Last and third NCHM JEE 2014 Counselling round comprising online registration and choice filling has kicked off at all 14 Admission Centers to offer admission for 3157 vacant seats, declared by the exam conducting authority NCHMCT due to non- reporting of candidates. Earlier, the vacant seats strength stood at 3109 in the tentative vacancy list announced by the NCHMCT.

Click here to enroll  for All India HM Counselling Pack 2015 to get All Alerts, Updates and Guidance for College Selection

Candidates,who remained absent in earlier seat allotment rounds or candidates allotted with seat but not reported at admission centre, are eligible to participate in the spot or round three of NCHM JEE 2014 Counselling.

After the completion of “Choice filling and locking” process, candidates will be provided with a document mentioning verification status, DD details and locked choices details

Seat allotment is scheduled to begin on July 10, 2014, the event will include candidates reporting at the Admission Center (ACs) for documents verification, initial fee payment, and to collect the provisional admission letter.

The entrance exam was conducted on April 26, 2014 to admission for B.Sc. Hospitality & Hotel Administration courses on 7945 seats across 21 central government IHMs, 16 state government IHMs and 14 private hotel management institutes. The written exam was registered by 21,600 applicants and as many as 19000 candidates appeared for the exam.

Stay tuned to hospitality.careers360.com for more news and feature articles on Hospitality and Tourism exams.

Hotel Management Courses after Class 12 - Get a list of all the courses provided by the top insti...

if submit the form online and any issues can i cancle the form .and subbmit new form .pls take the ans emideitly

No it won't be possible. Once form is filled up and submitted it won't get cancel. You can not fill another form as your credentials are stored in a database and database doesn't store duplicate value.

The webpage is linked to a database and online server which takes care of this.