NCHM JEE 2014 counselling registration to begin from May 26 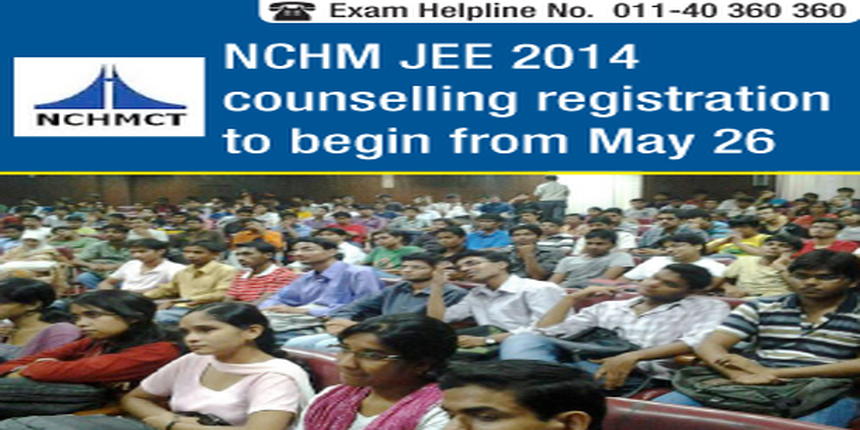 National Council of Hotel Management and Catering Technology will begin registration for NCHM JEE 2014 counselling from May 26, 2014. Earlier, the information brochure had stated that counselling activities would commence from first week of June.

Registration process for the online counselling and choice filling will start from May 26, 2014 and end on June13, 2014 at 5.00 pm, followed by multiple rounds of mock counselling.

L.K. Ganguli, Director (Accounts & Finance), NCHMCT told Careers360 that Choice modification for 2nd round of counselling will take place in online mode and can be exercised from June 25 to June 27, 2014 till 5.00 pm. The change in counselling schedule has been made in accordance with NCHM application deadline, which was extended till April 11, 2014.

There are three rounds of counselling, and SPOT round seat allotment will close on July 10.

Further, the director informed the tentative dates of upcoming three rounds of NCHM JEE 2014 counselling, which is presented below -

NCHMCT has extended application deadline for undergraduate programme in B.Sc. in Hospitality & Hotel Administration till April 11, 2014.  Earlier, the last date of application was April 7, 2014.

According to official sources, more than 20,000 candidates have registered for the exam this year whereas in 2012-13 the total number of applicants was 15,215.

Hotel Management Courses after Class 12 - Get a list of all the courses provided by the top insti...

if submit the form online and any issues can i cancle the form .and subbmit new form .pls take the ans emideitly

No it won't be possible. Once form is filled up and submitted it won't get cancel. You can not fill another form as your credentials are stored in a database and database doesn't store duplicate value.

The webpage is linked to a database and online server which takes care of this.