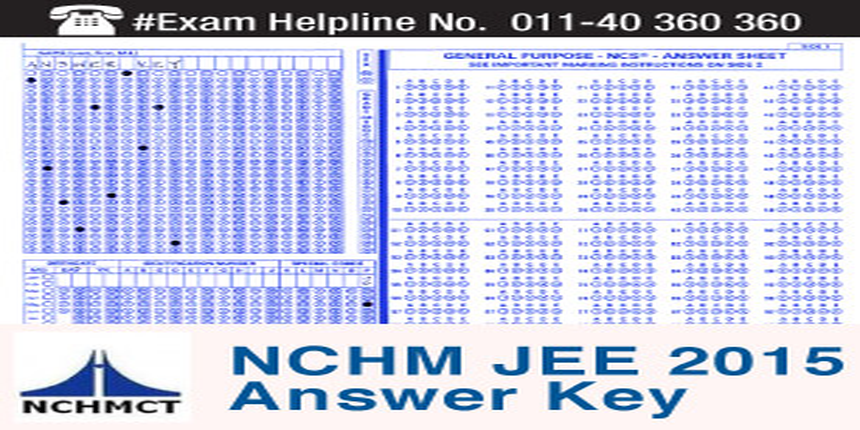 As the NCHM JEE 2015 exam gets conducted on April 25, 2015, candidates will search for NCHM JEE 2015 Answer Key. But the official Answer Key for NCHM JEE 2015 will not be issued by National Council of Hotel Management and Catering Technology (NCHMCT). Careers360 may provide the answer key of NCHM JEE 2015 if it’s announced by any other sources including the coaching institutes.

NCHMCT officials in exclusive conversation with Careers360 have confirmed that the official NCHM JEE Answer Key even in the previous years was not released, and the same will be followed this year as well.

NCHM JEE 2015 Result is expected to be announced in the second week of May.

Usually, NCHM JEE 2015 Answer Key is required by the candidates for verifying answers which they will be marking while appearing in NCHM JEE 2015 paper on April 25.

As per the marking scheme of NCHM JEE 2015, each correct answer will fetch you 1 mark and for every incorrect response, 0.25 marks will be deducted from the total scored marks

*Note – Careers360 doesn’t guarantees NCHM JEE 2015 Answer Key. The answer key of NCHM JEE 2015 shall be available only when the same has been provided by NCHMCT.

According to National Council of Hotel Management and Catering Technology (NCHMCT) officials, around 23000 candidates have registered for the most coveted hotel management entrance exam. NCHM JEE 2015 is to be conducted on April 25 at 49 centres in 33 cities of India for admissions to 7482 seats in 51 participating institutes.

Stay tuned to law.careers360.com for more news and feature articles on NCHM JEE 2015