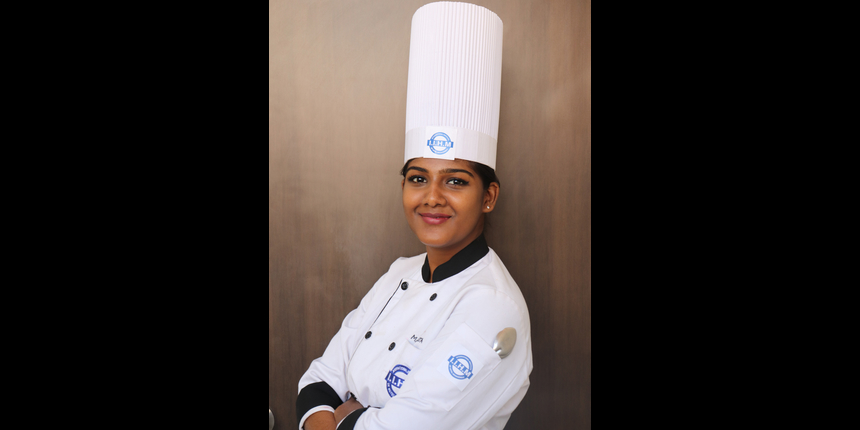 Six days, four cities and three thrilling rounds later, the fifth edition of International Young Chef Olympiad (YCO) 2019 concluded on the evening of February 2, 2019, at IIHM Global Campus in Kolkata. Madhumitha K.P., a third-year student at the International Institute of Hotel Management (IIHM) Bangalore, was the only student chef to represent India at the competition. “It was difficult for people to understand that I wanted to become a chef”, says Madhumita. YCO is the world’s biggest culinary competition for student chefs held in India this year from January 28, 2019, to February 2, 2019. YCO 2019 saw participation from student chefs from about 50 countries. India, represented by Madhumita qualified till the second round. Cyrene Randrianasolo from France bagged the winner’s trophy. The final round included preparing a salmon-based dish, a potato-based side and a dessert.

Madhumita shares with Careers360 her culinary journey, right from her decision to enter this field to her studies at IIHM and the experience of competition. “I come from a typical South Indian family; my father is in the IT profession, my mom is a headmistress at a school and my sister is a doctor. It was difficult for people to understand that I wanted to become a chef,” she says. Given below are the snippets of the interview with Madhumita, the only student finalist from India to represent India in YCO 2019.

Excerpts from the interview:

Careers360: You were the only student selected to represent India in the international Young Chef olympiad. How did you feel...

Madhumita: I was really excited to represent India and to compete with all these people from 50 countries in the Young Chef Olympiad. I was undergoing a lot of emotions from being very nervous, excited and proud, all at the same time. We came quite far in the competition on making it to the top four this year.

Careers360: Were you nervous?

Madhumita: Well yes I was. While I was nervous, the thing that drove me is that I really wanted to put India on the global culinary map. Last year India got the silver medal and this year my aim was to not go back without one of the top three trophies. I hope that we get the gold because that’s what we are aiming for.

Careers360: Please walk us through your journey till here. How did you enroll in the competition, etc?

Madhumita: There was an open call for all students of IIHM throughout India. We have seven campuses in India and every campus had its own open call. From my campus there were 15 students who enrolled for it. Then there was a competition in my campus, where out of the 15 only 8 went through to the next round. Out of the 8 only 3 went through to the next round and finally there was just one winner from my campus and that was me. So I was the one from IIHM Bangalore. There was another competition that happened in Bangkok, where the winner from every IIHM had come. Again there were around 7 winners and out of them only 3 were chosen. There was yet another round in Kolkata, where the 3 finalists competed and I came out victorious and got the chance to represent India.

Careers360: What was the reaction initially from family or friends when you chose hotel management? Did you face criticism?

Madhumita: Not from my parents but from people around us. I come from a typical South Indian family; my father is in the IT profession, my mom is a headmistress at a school and my sister is a doctor. So it was difficult for people to understand when I said I wanted to become a chef. They tried convincing me to become a lawyer, an IPS officer or a doctor. People would tell my parents that this is not something they should want their daughter to do as there is no future in this profession. But I took charge of my own life and my parents have been very supportive since day one after I sat down with them and had an honest conversation. I told them that this is what I really want to do, if you put me into something else I can’t guarantee my success or happiness in the long run. So they let me do what I wanted to do.

Careers360: Please tell us in detail about your experience at IIHM. How long was the course? What all did you learn?

Madhumita: I am doing Bachelors in Hotel Management and this is a three-year course. There are four main subjects like front office, kitchen and housekeeping, along with other subjects. Whichever field you are interested in, IIHM provides you with amazing opportunities. The institute provides a wide range of opportunities for students to explore their talents while providing new learning experiences. If you are in kitchen, you have the opportunity to participate in the International Young Chef Olympiad. The first time when I went to my college with my parents for admission, the YCO video was being played on the projector. That day my mom asked me if she’ll ever see me like that and now I am here!

Careers360: Any plans after graduation?

Madhumita: Yes of course, it is time for me to start making plans for my future. After this I would like to go somewhere in Europe for five years. I would like to go to France or the UK to work and learn. After that I plan to come back to India and start my own establishment.

Careers360: What are some highly rewarding career paths in hotel management?

Madhumita: I believe it is completely up to an individual on how they make their career. I have seen people coming from accounts background and go into front desk and become the General Manager of the hotel in a very short time. Right now there are a lot of General Managers of hotels who are just 25 or 27, that’s a huge thing. Many people have come from front office and housekeeping backgrounds and made their careers. So highly rewarding career paths I think are like General Manager, an Executive Chef or you can also be a normal chef. In the end it depends on the individual on how they want to utilize the opportunities and what they want to make out of it.

Careers360: Your message for students looking forward to make a career in hotel management?

Madhumita: My advice would be to just start and not think twice. Criticism will always be there. If this is something you want to do and it makes you happy, then go for it. If you are not going to make yourself happy then no one else will.