Train to be a chef!

WHILE Indian chefs, today, are excelling at foreign cuisines like Mexican, Mediterranean and sushi, our own desi cuisine never fails to fascinate Chef Narayan Rao. Consider this; India is made up of 28 states and seven union territories. While a dining table in Kashmir looks very different from one in Kanyakumari, even within a 30 kilometre radius dining options vary based on one’s religion, community and food choices (non-veg, pesitarian (fish-eating), eggetarian, veg, satvik and vegan).

Phew! Even the respective colonial influence has left its mark on Indian platters. “The food varies depending on the season and offers a lot of depth,” elaborates Chef Narayan who was  Executive Chef of The Aman, a luxury hotel in Delhi until recently.

Main ingredient: passion
Chef Narayan’s reasons for joining the profession are “Pure passion and love for food!” Ditto for pastry chef Kishi Arora, who might have pursued an MBA after a BCom at the coveted commerce college SRCC, if her family had had their way. In the face of staunch of opposition, she took a loan and attended the Culinary Institute of America (CIA), a coveted institute in New York City. Still paying off her loan, Kishi seems very driven and convinced of her choice. 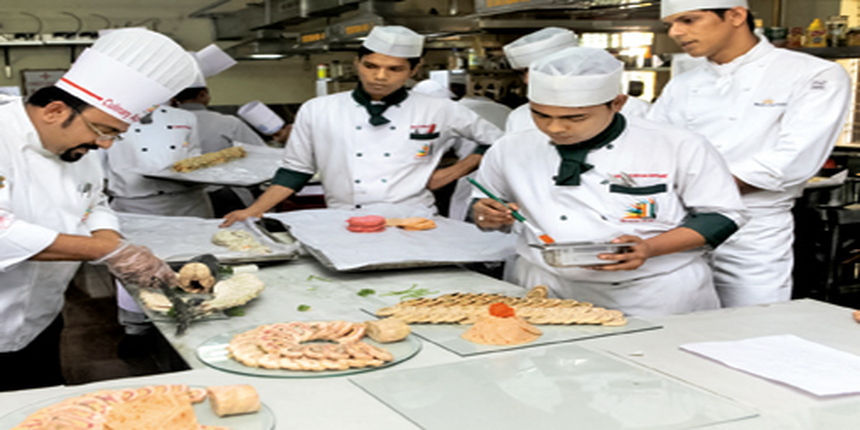 Job scenario
Chef K. Thirugnanasambantham, faculty at Welcome Academy of Culinary Arts (WACA), Manipal University says that the Bureau of Labour Statistics offers a positive forecast. An 11 percent increase in employment for chefs and food professionals, is expected by 2016.

Getting trained
Traditionally, those aspiring to be chefs would pursue a degree or diploma in hotel management, which trains one in the hospitality industry’s core functions - Housekeeping, Front office, Food & Beverage and Food Production. When Chef Sudhakar N Rao, a hotel management graduate,  returned to India after working abroad for many years, he felt the time had come for focused chef training institutes and programmes in India. So in 1996, he set up the Culinary Academy of India (CAI) in Hyderabad, with the help of qualified chefs, culinarians and hoteliering professionals.

Affiliated to Osmania University, CIA’s flagship programme is a three-year Bachelor’s degree of Catering Technology and Culinary Arts. Chef Sudhakar’s vision kicked off a new trend in culinary education in India, and today other institutes have followed suit.

How chef’s learn
Curriculum delivery is through classroom sessions, practical training on campus and industry internships. By the end of the CAI’s Bachelor’s programme, students will have worked in all eight full fledged-training kitchens, including a bread art lab and a cruise galley lab, as well as in the academy’s compact 40-cover fine dining restaurant that is open to the public. During her training days at CIA in New York, Chef Kishi recalls having to differentiate between 80 varieties of tomatoes as part of building product knowledge! Having been exposed to just one variety of tomato in India, the challenge proved overwhelming. But a kindly professor encouraged her to taste each variety to familiarise herself with flavours. And learning to differentiate she did!

Finding your niche
While having an awareness of all cuisines is good, developing a specialisation helps one excel. Chef Kishi recalls a major stumbling block during the course - butchery class. A vegetarian by birth, the task of cutting meat proved a tad traumatic. On the suggestion of a teacher, she switched from a culinary programme to Baking and Pastry Arts, and there she found her niche in the culinary arena. She went on to play a major role in the set up of food chain Mad Over Doughnuts in India and now, runs her own enterprise Foodaholics in Delhi, which focuses on creating pastries with complex  flavours and textures.

Post chef’s training
Recruiters include ITC Hotels, Taj, Oberoi, Starwood, The Leela, The Park Group, Lemon Tree Hotels and the Four Seasons. You can also work at restaurants, food chains, corporates, caterers and more. While uniformity is missing when it comes to the chef’s career hierarchy, Chef Thiru shares one progression: Corporate Chef, Executive Chef, Senior Executive Sous chef, Sous Chef, Junior Sous Chef, Chef de partie, Demi Chef de partie and Commis. Trainee chefs can start off with salaries between Rs. 12,000 and 35,000. But as chefs ascend the ladder, they eventually end up doing a lot more then cooking. This includes quality control over ingredients and food served, curbing wastage, managing finances, planning menus and hiring and managing teams. Hence, a good chef has to be a good leader.

Culinary adventures
One of Chef Narayan’s wildest experiences was leading a team for a celebrity wedding at a jungle resort. While guests  let their hair down, it was madhouse backstage; 6 am to 10 am was breakfast, 12 pm to 4 pm was lunch and 6 pm to 10 pm was dinner! This routine continued for six days. While high profile events like this one bring on the adrenaline rush,  a most precious moment in the chef’s career was when the late actor Shammi Kapoor summoned him to his table. “He kissed my hand and remarked that my food reminded him of his mother and his days in Pakistan before independence,” reminisces the chef.

The labours of love
While money, fame and celebrities on speed dial are by-products of success, be prepared to slog it out for the first five years of you career,  including keeping work stations spotless and peeling potatoes. But take heart that most veteran chefs have been through this grind and consider these basic tasks essential to lay the foundation. “On the bad side,  you will work late all through your career,” says Chef Sudhakar. “Once you have established yourself in the field, you are a celebrity,” he adds. In case you haven’t realised, the word ‘chef’ tends to get prefixed before one’s name, almost like a title, which of course must be earned. Some chefs have even been known to wield more power than the General Manager of the hotel! This is simply because people know  the real value of good food – priceless.

Are you a trainee chef, faculty or culinary professional? Share your tips and advice here for the benefit of students!